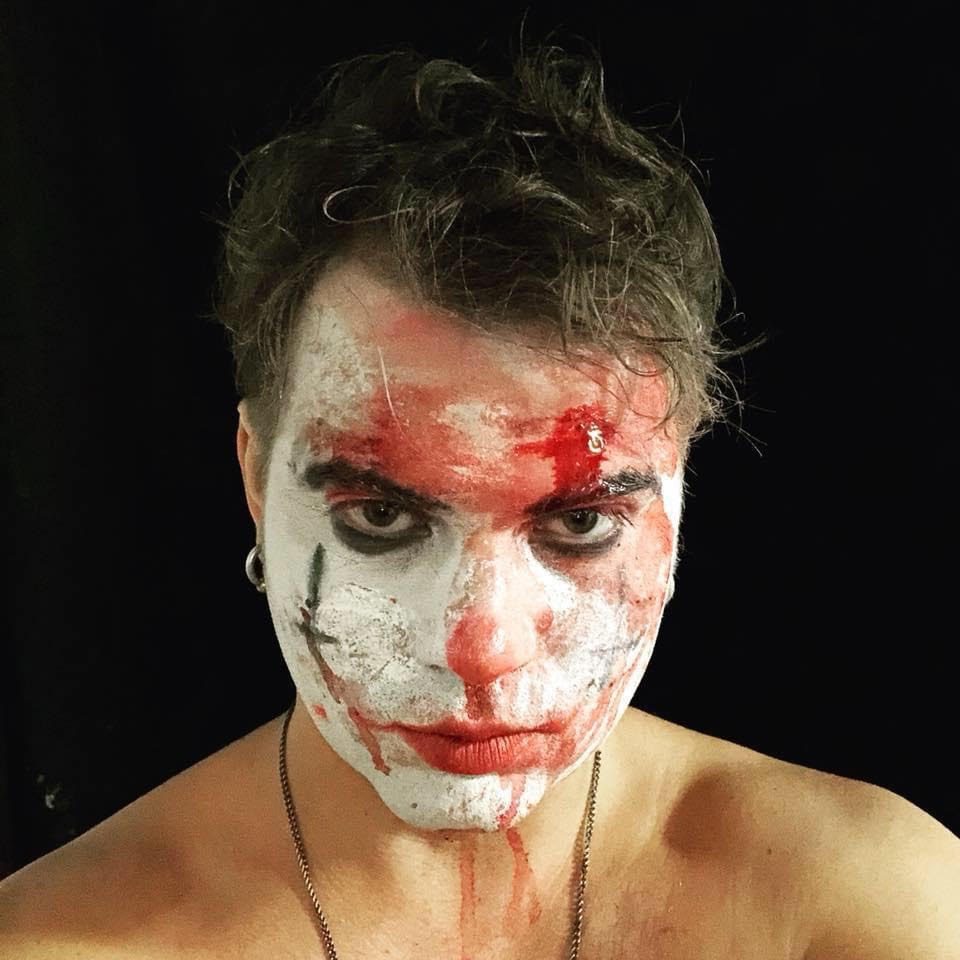 Portrait In Blood is a collection of performance artists curated by Jason Lutz, otherwise known as Mister E., all centered around the act of bloodletting. Lutz himself has a background in live piercing and human pincushion, and although he is the producer of the Dead Flowers Circus Sideshow, he stresses that the content of Portrait In Blood is not typical of a Dead Flowers production, “Portrait in Blood deviates from what Dead Flowers Circus Sideshow typically does in some aspects, because our variety shows are kind of like a fun, crazy, weird experience, where Portrait in Blood is more of a performance art based show, but it is all based around bloodletting performances. It’s shock art, basically”. While Dead Flowers is a traveling underground circus, specializing in sideshow, Portrait In Blood is an expressive piece of art that may have connections to sideshow, but offers a viscerally different experience for audiences. “Sideshow is something I love, but I feel like with bloodletting and live piercing, as an artist I can be much more of an artist. Sideshow there’s sort of like a box that I’m in. There’s sort of a formula for it. But with bloodletting, it’s shock art, and emphasis on the word art”. Involving a variety of different acts, using human pincushion, flesh hooks, suspension, ect., Portrait In Blood is a sometimes shocking, sometimes beautiful, piece of art that uses the medium of bloodletting as a way to communicate something as a performance piece. Lutz cites the modern primitive movement as being an inspiration for himself as an artist, and the content of Portrait In Blood. Fathered by performance artist Fakir Musafar, the modern primitive movement is an exploration of ritualism and the human body, reviving ancient body-related practices for personal expression and exploration. Entering the art world as a painter, Lutz explains that being exposed to artists such as Gisella Rose, a human pincushion performer from South Africa, sparked his interest and journey into the world of sideshow and bloodletting as a performance art. “My original background is in painting… I always identified as an artist. And then I start performing, and sideshow, it is a really fun outlet but I didn’t see anything that was really visceral, in the sense that I saw in Gisella’s performances… She’s a total artist. It’s an experience when you watch her perform, and it’s very arresting, and you can’t look away. Even people who might not like to see something like that, I feel like they can’t help but look at what’s happening”. Lutz is intrigued by this captivating element of bloodletting, as the shocking nature of the performance can capture audiences in a visceral, visual sense, and also as a piece of art.

Sideshow and bloodletting are forms of art that are not common both in the Philadelphia art scene, or in the queer art scene at large. “You don’t really see stuff like this happening here, out in Philadelphia, I would say. It’s more something that’s happening in San Francisco and Los Angeles”, explains Lutz, “The Philadelphia gayborhood is great, but maybe like 10 years ago I don’t think anybody knew what sideshow was there. It was all drag shows. So, every week I would get on stage and do something crazy, and a completely different audience from what I’m used to would be like ‘Holy shit! What is this guy doing?’”. Sideshow, while often used in the context of circus, is itself a widely unknown and misunderstood art form. Taking inspiration from performers centuries ago, who did acts they believed would bring them closer to god, such as sword swallowing, fire eating, human pin cushion, and suspensions, sideshow became an American art form in which performers execute these same acts to produce a shocking performance of human ability. “There’s this one performer who has this tagline… ‘I go there so you don’t have to’. I think that’s a perfect way to describe what the sideshow is. Anybody could really do it. Any human body could do it. But these people are the daredevils who are willing to, for entertainment purposes”. Lutz is specifically interested in exposing communities, such as the Philadelphia gayborhood, to this form of performance art, as it is practiced by many yet widely unknown or unaccepted. “One of my biggest missions [while touring with Dead Flowers] was getting gay bars to realize there are different forms of entertainment aside from drag. A big thing I’m always trying to push with gay bars, as a queer person… I have kinda weird feelings about the Boulet Brothers and Dragula… but they kind of did give a platform for queer artists that’s more alternative than what you saw before that, which is cool… Now at least I think there’s a little bit of a door open because of that show, maybe, for queer artists who do things that are a little bit different or shocking in gay bars”. Lutz himself has worked in the Philadelphia scene for years, performing sideshow acts to expose audiences to the world of shock performance. “I remember I did ‘Mr. Everything’… it was a competition show to find ‘the best’ male-identified performer in the Philadelphia gayborhood, and I did a stunt where I took a venomous scorpion, and I put it in my mouth, and this lady in the front row- she literally fainted. In the sideshow we call that a ‘falling ovation’ which is, like, our equivalent to a standing ovation”. Portrait In Blood will be an exploration of the human body and it’s capabilities, performed through bloodletting. Accompanying the performers will be a piece of video art projected in the background, loosely tying the individual acts of bloodletting together. Lutz emphasizes the individuality of each act in the collection, stating, “What I do particularly in our show is shocking, some people in our show do things that are more beautiful and less graphic, like circus performers, aerialists, and contortionists. What they’re doing, to me, is amazing, and mesmerizing, what I’m doing is shocking”. Lutz himself will be performing live piercing in the show, and the rest of the performers are almost all from the Philadelphia performance art scene. With a wide variety of different acts and intentions being put on the stage, Portrait In Blood is a dynamic art piece that is sure to excite and shock audiences of varying interests or comfort levels. “Everyone is going to do something that is very shocking, very visceral, maybe thought-provoking, maybe not, maybe it’s more of an emotional reaction. But, I’m really proud of the cast that we put together”.

“I think a really good quote is, something along the lines of, ‘Good art isn’t boring’. So if you get a reaction out of people, whether it’s sort of negative or controversial, as opposed to just like ‘meh’, that’s a good thing!”. Portrait In Blood is sure to shock audiences, and as the FringeArts guide describes, is not for the faint of heart. However, the work put in by the artists and the depth of their explorations of their own limits is immensely intriguing, enough so for this faint-of-heart writer to be convinced to buy a ticket to the show. “I do want audiences to be shocked. But I also want them to understand that there is a place for this kind of thing in performance art, emphasis on the word art. It’s not necessarily self-mutilation. Body modification is an art form, and that’s what the show is about. It’s basically using the body as a canvas”. Join Jason Lutz/Mister E. and the cast of Portrait In Blood on Friday October 1st at The Painted Bride Art Center as a part of the 2021 Philadelphia Fringe Festival! Audience capacity is limited for COVID-19 safety, so get tickets while you can!